The summary is that it was a truly wonderful Hewitt for the society. We reached the quarter final, something we haven’t managed to do in the lifetimes of 6 of our squad (32 years ago). We beat Harrow, we took Watsons right to their limit (we clearly took it out of them, they lost 4-1 to the eventual winners, Eton). We blooded two ‘rookies’ who played some breathtaking golf and saw James and Giles win 3 of their 4 matches. John played his 74th match to draw level with M.J Burgess as the most capped Old Cranleighan in the Hewitt and we even managed to find 40 year old Will Porter a partner whose mother is younger than him!
I’d like to thank Matthew for his excellent on-course captaincy and to Martin, Luke, and Carl (Moore) for their caddying. Most importantly, from the squad a very big thank you of course goes out to our wonderful array of supporters who cheered us on – your encouragement is hugely appreciated.

With a young and talented squad there is every reason to believe we can go even further over the coming years. Roll on 2016! 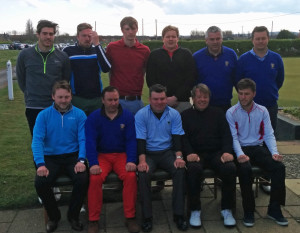 Thursday – Blundells at Royal St Georges
The match hinged upon the 4th pair, Adam and Tom, who were locked in a titanic struggle. Adam nervelessly holed from 10 feet at 18 to keep their match alive. Down 19, Tom hit a glorious approach from the right hand rough to 14 feet which Adam promptly holed for the 3 and the win. Whilst that match was putting out on 19, Marc and Will, having been 1 down on the 17th tee had turned their match around and were shaking hands on a 1 up win. A real nail-biter.

Friday – Harrow at Royal St Georges
This match was a slightly less stressful affair, with once again a strong showing from our final 2 pairs. Again, it was our 4th pair whose match again proved to be pivotal, but this time they were able to rely upon the Harrow pair rolling back into ‘Bjorn’s bunker’ on 16 several times, to help them secure victory.

Saturday am – Downside at Deal
Cranleigh hit it’s straps in this match with strong performances across the board. Of particular note was Tony and Craig, who expertly put to the sword an ex-pro and seasoned golfing-gambler from Sunningdale. On a lighter note, Downside’s 4th pair, having had to use the ball scope to retrieve their ball from the water at the first at Deal left it laid out longways in-front of the ditch. A rare bad shot from Marc should have been punished with a trip to the drink, but the ball was halted by the scoop. Will promptly chipped in from there for the birdie and to go one up. The Downside 5th pair were not best pleased.

Sunday pm – Watsons at Deal
Following our victory in the morning, cheese and ham sandwiches were quickly ordered and consumed, and we assembled outside the club for our quarterfinal photo. Out on the course the wind had picked up to around 15-20 miles an hour and Watsons settled to conditions quicker. Down the stretch Giles and James managed to hold on to an ever-decreasing lead to close out their match with an excellent up and down at 18. Momentum had swung in the final two matches. Marc and Will valiantly clawed their way back from 5 down at the turn to being just two down on 17th tee, only to finally succumb to a truly impressive up and down from off the back of that green. Adam and Tom, once again came into their own, fighting back from 3 down, with Tom holing knee-trembling putts on 16 and 17 to be one down on the 18th tee. Watsons were wobbling but managed to hole from 12 feet to secure their 4 and their place in the next round.