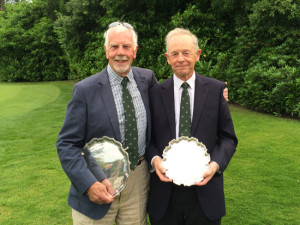 A fantastic win this year for Cranleigh with Richard Sykes and Ian Borrow taking the trophy from Mill Hill winning by 1up! They were also best qualifiers with 26 points which is no mean achievement off scratch and having not scored at the first and second holes. I caddied for Richard in the final and was privileged to witness every twist and turn of a fascinating match. Cranleigh were never ahead in the whole match until the 18th. We were three down after the 13th, getting it back to one down standing on the 17th tee. A 25 foot putt by Richard for the five then made Mill Hill’s five footer for the half suddenly look much longer! They lipped out and it was all square going up the 18th which Cranleigh won with a very solid five.

The last Cranleigh winners of the Millard were Bobby Stovold and Robin Elsdon-Dew in 2009 and I was fortunate to be caddying for Bobby that year with Ian Borrow caddying for Robin. Prior to that Geoff Bennett and Neil Jones won the Salver in 2002 so it would appear that we are destined to win this every seven years! Roll on 2023 and I wonder who will be representing us.

We had difficulties this year in fielding our strongest team but in the event had a convincing win against Hustpierpoint in the first round with Martin Riddiford and Richard Williams winning 5/4, Jeremy Weller and Mark Burridge winning 3/2 and Tony Mote and Andrew Cronk taking a half despite being ahead. The match against Sherborne in the second round went to the wire with a win by Jeremy Weller and Mickey Moore 2/1, Tony Mote and Andrew Cronk going down 4/3 and the deciding match of Martin and Richard being lost 1 down.

It was an exciting contest and could so easily have gone our way and congratulations are due to all our team for some excellent golf.

Tony Mote and Andrew Cronk had an excellent win 3/2 in the first round against Hurstpierpoint but Derek Lyons and Anthony Fey lost 2/1 forcing a sudden death play-off which for the third year running, we lost!

We were unable to perform much better in the plate in the afternoon against Sherborne when Mickey Moore playing with Andrew Cronk and Derek Lyons and myself both lost their matches.

This was a thoroughly enjoyable year and my thanks to everyone for their support and contribution both to those who played and also to those who came along to watch. It provides encouragement to the players when other OC’s are spectating and we are indeed fortunate to always have supporters who are genuinely interested in how the teams are progressing. 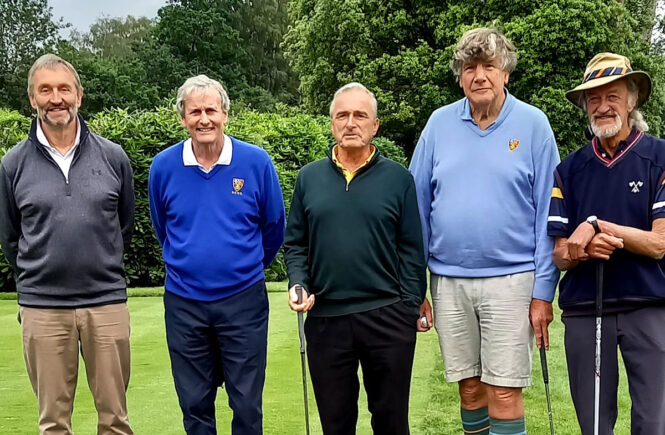